Where Lawyers Fear To Tread

​
​
Where Lawyers Fear to Tread is now available in Kindle, Nook, and iTunes ebookstores, in a new omnibus edition with A Radical Departure. It is the debut crime novel featuring lawyer Willa Jansson, who was described by The New York Times as, "One of the most articulate and surely the wittiest of women sleuths at large in the genre."

All Willa has to do is finish her last year of law school, and she'll get the job of her idealistic dreams. The lawyer who routinely keeps her social activist parents out of jail—or at least joins them on their courthouse soapbox—asks only that she graduate with honors and on law review. So far, so good. Willa is near the top of her class at Malhousie Law in San Francisco's Tenderloin district, and she's the law review's senior articles editor.
​
Everything changes the morning the new issue comes out. Furious professors, stressed out students and even local politicians troop through the basement office to confront Susan Green, the editor-in-chief. But Willa has no clue, while she's dying of boredom in her income tax class, that Susan is slumped over a manuscript, dying of a blow to the head.

​When another editor insists it's his right to take over for Susan, he's killed in exactly the same way. Willa's not exactly thrilled to be third in line, considering someone may be trying to climb the masthead one dead body at a time.

Find out why the Houston Chronicle wrote that "Willa's cases and escapades always top the fun-to-read list," and Fresh Air's John Leonard said, "I'm in love with Willa!"
​ 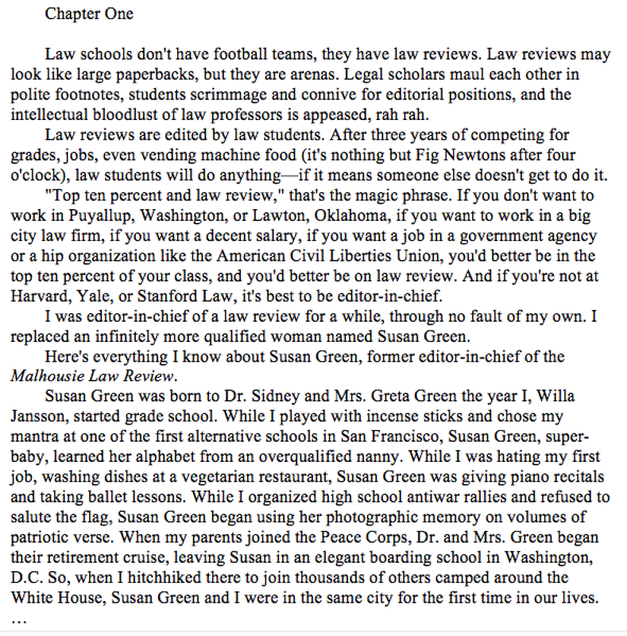 "An exceptional debut ... A delightful romp,
and a satiric and satisfying look at the
training grounds for the legal profession."
Wilson Library Bulletin