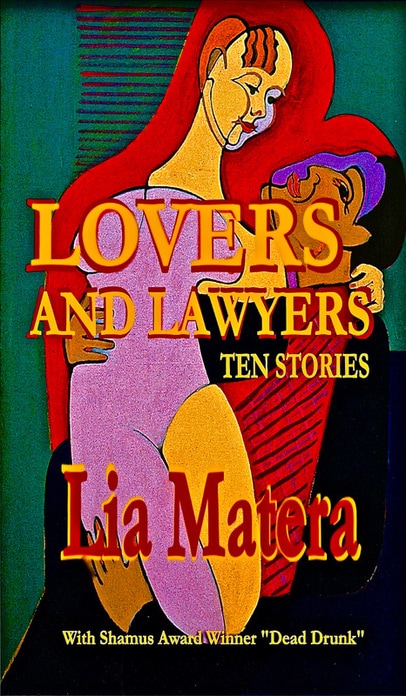 Lovers and Lawyers: Ten Stories is available in Kindle, Nook, and iTunes ebookstores.

The collection includes "Dead Drunk," which won the Private Eye Writers of America Shamus Award for best short story of 1996. It's about a shoestring attorney whose client may be pouring water on passed-out drunks so they freeze on winter nights. It was originally printed in Guilty As Charged, edited by Scott Turow, then reprinted in The Year's Twenty-Five Finest Crime and Mystery Stories, edited by Joan Hess; The World's Finest Mystery and Crime Stories, edited by Ed Gorman; A Century of Noir, edited by Mickey Spillane and Max Allan Collins; and The Shamus Winners, Volume II: 1996 – 2009, edited by Robert J. Randisi.

Three other stories round out the Lawyers part of Lovers and Lawyers.

"Easy Go," first published in Deadly Allies, edited by Robert J. Randisi, follows an attorney ending a three-year suspension from practice. Her only shot at rehabilitating her résumé is to work for an ex-fiancé who testified against her.

"Dream Lawyer," from Diagnosis: Dead, edited by Jonathan Kellerman, is the only story with characters from both my mystery series. When a detective from Laura Di Palma's firm hints to Willa Jansson that she should investigate her client, Willa can't decide if it's a friendly tip or attempted sabotage.

"Counsel for the Defense," from the first Sisters in Crime anthology, edited by Marilyn Wallace, shows a lawyer torn between defending her ex-husband in court and harming him in private.

The lovers in the collection are found in the remaining stories. In "The Children," first published in Ellery Queen Mystery Magazine, September/October 2011, a servant's fear for a distant loved one opens the door to 1918's Spanish flu.

"Destroying Angel," from Sisters in Crime 2, edited by Marilyn Wallace, is about a mycologist wrongly accused of serving poison mushrooms at a fungus fair.

"The River Mouth," from The Mysterious West, edited by Tony Hillerman, is about a couple hoping to find answers to their romantic troubles on the Klamath River, where it meets the ocean on Yurok tribal land.

"Do Not Resuscitate," from Crimes of the Heart, edited by Carolyn Hart, finds a second wife too destroyed by jealousy to let her husband die in peace.

"Performance Crime," from Women on the Case, edited by Sara Paretsky, follows the contortions of a staid board member trying to protect an art-house theater from the actor she adores.

"If It Can't Be True," from Irreconcilable Differences, an anthology of original stories by 20 crime writers, edited by Lia Matera, shows a family torn apart for refusing to accept nonsensical explanations when sensible ones fall short.