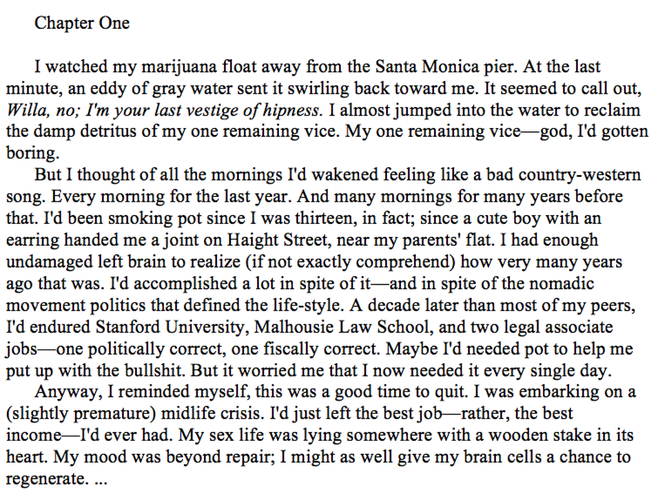 ​Prior Convictions is now available in Kindle, Nook, and iTunes ebookstores, both separately and in omnibus editions with The Good Fight and with Hidden Agenda. It was a New York Times Notable Book of the Year and was nominated for the mystery genre's top prizes, the Edgar Allan Poe Award and the Anthony Award. Publishers Weekly said of it, "Readers will be shaken by Matera's rapier-sharp dissection of personal relationships and radical ideologies. Matera again demonstrates that she is one of today's best mystery writers."

Attorney Willa Jansson spent the last year picking up the pieces after an epic hit to her résumé. In the L.A. office of a Wall Street firm, she was buried under bankruptcy codes. Worse, she was mourning a love life that was lying back home with a stake in its heart. Now she's made 347 chalk marks on the wall, and it's finally time to return to San Francisco.

But Willa finds no warm welcome there. Her mother is still furious about her corporate sell-out. Her despised ex demands an outrageous favor. And her new boss, a federal court judge, is already getting hate mail about Willa's supposedly radical past.

It soon appears that Willa's family and her oldest friends are conspiring to sabotage her. What happened in her absence to turn everyone against her? If Willa can't figure out what's at stake for those closest to her, she may end up dying for a cause none of them believes in anymore.


Praise for Prior Convictions:

"Intelligent and entertaining... Absorbing... With sharp descriptions and crisp dialogue…admirably delivers the complex situations and memorable characters of a 'real novel' while still managing to let the detective story have its day in court."
The Wall Street Journal

"Here is a mystery with a distinctive voice, sharp wit, discussion of social and moral issues, insight into personal ideals and compromises and characters that grab your emotions."
Washington Post

"Almost every paragraph is eminently quotable."
The Cleveland Plain Dealer

"Matera's wit, grace with language, irreverence toward the legal system, and wry dissection of being a child of the Sixties make this a standout… If you want to catch an author on the verge of best-sellerdom, read this."
Kirkus Reviews

"Willa Jansson is an unusually deep and complex character for crime fiction—tough-minded, sexual, vulnerable, lonely, morally alive… Prior Convictions is gutsy, grown-up crime-writing from one of the best practitioners around. It's hard to imagine Matera won't soon have the huge audience she deserves."
Newsday

"Matera's language is witty and sharp; her images by turn humorous and poignant. The moral dilemmas with which her characters wrestle are real and wrenching. And the mystery itself is shrewd. Prior Convictions is a superb psychological thriller."
The Recorder

"Lia Matera is a mystery writer with something to say and a fascinating way of saying it… Prior Convictions is an intense story of personal relationships and an exciting mystery."
Richmond Times-Dispatch

"Readers will be shaken by Matera's rapier-sharp dissection of personal relationships and radical ideologies. Matera again demonstrates that she is one of today's best mystery writers."
Publishers Weekly

"What cinches the book is that Matera seems to really understand the moral and social issues that were on the deck in the late '60s and early '70s, and she's not interested in blowing them off. She's smart enough to realize that many of these issues are still with us… Good stuff."
Austin Chronicle
​