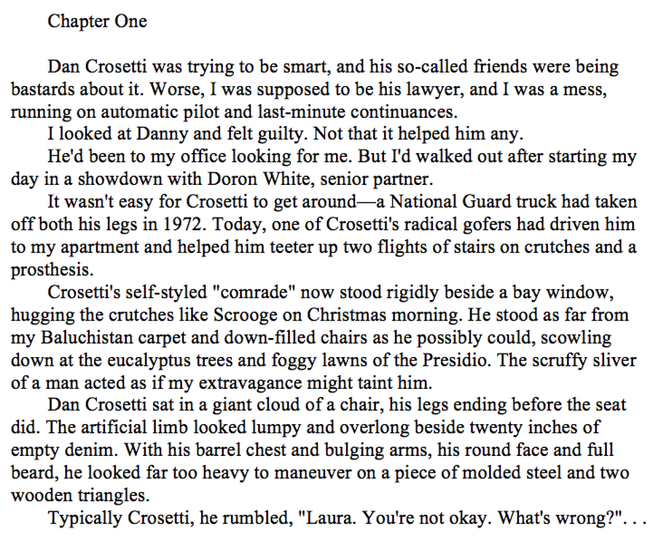 The Good Fight is now available in Kindle, Nook, and iTunes ebookstores, both on its own and in an omnibus editions with the Willa Jansson novel Prior Convictions, and with first novel in the Laura Di Palma series, The Smart Money. The New York Daily News described The Good Fight as "compelling," saying, "Matera writes with passion about debts to old lovers and old causes." But if San Francisco litigator Laura Di Palma can't find a way to honor those debts, she'll lose everything she's worked for and everyone she loves.

Laura's significant other is missing from the hospital, and he's probably too ill to survive on his own. She'll do anything to find him, but there couldn't be a worse time for her to ignore her work.

The top partner at her firm will fire her if she doesn't drop her controversial new criminal case. But she can't abandon Danny Crosetti, a political activist friend accused of shooting his closest comrade… a coworker who turned out to be an FBI agent sent to entrap him.

Fighting for her job, torn between helping her client and searching for her vanished lover, Laura is forced to reconcile the activist she used to be with the lawyer she's become.
​
​Praise for The Good Fight

"Extraordinary, thought-provoking. Laura Di Palma is one of the most compelling characters in recent mystery fiction." Baltimore Sun

"A satisfying blend of emotion, suspense and mystery." The Pittsburgh Press

"Matera has her own distinctive voice... Her off-beat plots, quirky style and hard-to-pin-down characters make for a novel both unique and entertaining." San Diego Union

"By any standard, this is superior mystery fiction. The author's sensitive description of the fall-out from Vietnam and the Sixties adds a poignant quality to a detective story with more than ordinary dimension, featuring a heroine who is warm, capable, tough... Skillfully plotted, expertly written…its story compelling and satisfying." Mostly Murder

"More proof that some of the leanest, most tough-minded prose is coming from women... With emotional zingers throughout and no easy answers." Kirkus Reviews

"Lia Matera just keeps getting better…telling a story of heroes who will never receive medals or popular glory. Matera tells this tale with passion and integrity." Sarah Paretsky