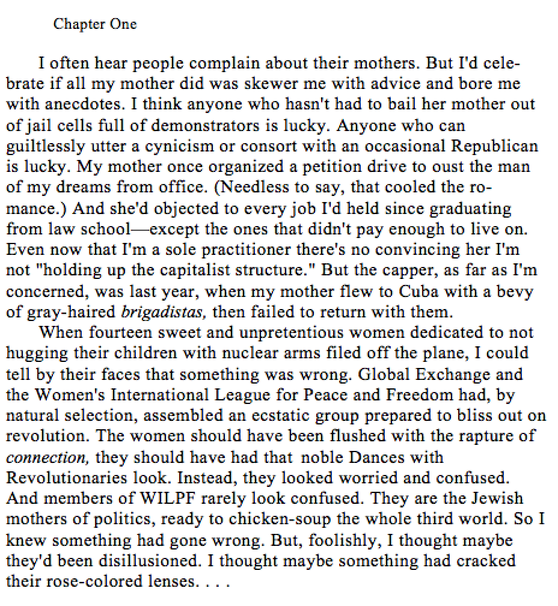 June Jansson has long been in the habit of organizing or joining political protests. After seventeen arrests, fourteen convictions, and eleven stints in jail, she surprises no one—least of all her doting but exasperated daughter—by flouting the Trading With The Enemies Act to illegally visit Cuba. But when the rest of the lefty tour group returns without June, Willa fears her mother's bleeding heart has gotten her into more trouble than Willa can get her out of.

Risking her career and her passport, Willa rushes to Cuba to retrace her mother's steps. Under the wing of newfound reporter friends—or are they CIA agents?—Willa soon finds herself in Havana neighborhoods tourists rarely visit, seeing things Americans are not supposed to see. Manipulated, misled, and nearly arrested, Willa is a whisper away from triggering an international incident.

When people start disappearing and dying because of Willa's search, the U.S. State Department, the Cuban Interior Ministry, and Willa's old flame from San Francisco Homicide step in. With two angry governments and a ruthless killer close on her heels, Willa tries to keep herself out of Cuban and American prisons at least long enough to find and rescue her mother.

The Houston Chronicle says that "The beauty of Matera's writing is that the story, fun as it is, doesn't shortcut a shrewd social commentary on the current state of the Cuban Revolution and U.S. policy toward that country."

Praise for Havana Twist:
​
"With its page-turning plot, self-realized setting, and terrific characters, one could fairly call this the best Jansson adventure yet--and that's saying a great
deal."
Booklist (starred and boxed review)

"Matera uses thecomplexities of the Cuban revoution and modern skullduggery to build her tale... [T]he appealing Willa is fun to watch as she reacts with healthy doses of common sense, fear, humble confusion and wit to her various troubles."
Publishers Weekly

"Willa's cases and escapades always top the fun-to-read list, and Lia Matera's Havana Twist is a terrific addition to this personable series. ... The beauty of Matera's writing is that the story, fun as it is, doesn't shortcut a shrewd social commentary on the current state of the Cuban Revolution and U.S. policy toward that country."
Houston Chronicle

"Here begins a marvelous adventure. ...The array of characters is marvelously vivid. Matera's portrait of present-day Cuba, with its hardships, shortages and corruption, is an education in itself. ...And by the way, the plot and resolution of the mystery--what did actually happen to the heroine's mother--is intricate and convincing."
Pittsburgh Post-Gazette

"Matera, a resident of Santa Cruz, has fun with her stories and writes well enough to pull it off. Her voice is clear and light, and she knows when to jettison the gags and get on with the story. As long as Willa is still the star of the show, the series will stand out in the often homogenous mystery landscape."
San Francisco Chronicle

"[T]he grim images of of homes without electricity, hospitals without drugs and shops with bare mannequins in the windows make Willa's rogue adventure a trip worth taking."
New York Times Book Review

"Ms. Matera has written a timely story in easy-to-read format. In addition to the Willa Jansson stories, she is the author of another winning series--all well put together, thoughtful and warm views of what happens when a lawyer refuses to play the money game and listens to her own beliefs rather than the powers that be."
Dallas Morning News